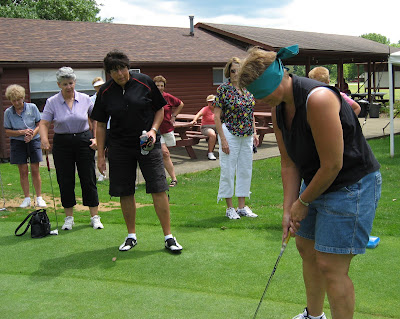 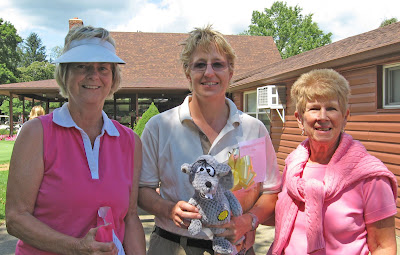 This year's annual YWCA Ladies Carnation Scramble, our 13th, honored the memory of three local women golfers, Betty Rennels, Hazel Tolerton, and Melba Cook. Newly married, the three woman all set up housekeeping on Ridgewood. Over the years, they gathered to walk with their young children and talk. They soon discovered they had common interests. They loved to golf, and all were active in our YWCA. As their children grew, the woman took them along to the golf course. Somewhere along the way the friends were affectionately dubbed "The Three Blind Mice."

On 8-8-08, we gathered at the beautiful Tannenhauf Golf Club to honor the memory of the Three Blind Mice, three great friends who enjoyed each other's friendship for many years and really enjoyed a good game of golf. On hand to join in the celebration were Honorary Chairs, Judy Tolerton (Betty's daughter and Hazels's daughter-in-law) and Corrine Hirvela (Melba's daughter).

This year's scramble had a special twist. After playing 18 holes, golfers were invited to try their skill and luck at making a putt while blindfolded after a little spin by Dottie Callender, the Chair of the event. Teammates assisted by verbally lining up the shot. Winner of the game was Lynn Dezelon, who received a basket of goodies any "mouse" would enjoy.

Thanks to everyone who made the scramble a success including our event sponsor, Terry's Tire Town, and the three lovely women who enjoyed a lifetime of friendship.
Posted by YWCA of Alliance at 8:12 AM

I'm not positive where you're getting your data, however incredible point. Check out this one http://www.pickthebrain.com/blog/chronic-procrastination/ I'd definitely appreciate it.